In a hole in the ground there lived a hobbit.

For our non-Tolkien friends, that’s the start of The Hobbit. And if you haven’t read Tolkien’s works, do yourself a favor and get on that stat.

Jeff and I visited the Mecca of LOTR monuments, Hobbiton. This is located in a little town called Matamata, NZ (which I’ll let Jeff at a later post blog about). It didn’t disappoint! We were worried that it would rain (it did the day before), but it was nice and sunny and about 68 degrees. We were part of about 40 people in our group, but seemed fairly small. The guide asked several questions to quiz our knowledge and it was awesome to be surrounded by other geeks (and yes, Jeff and I held our own on the quizzing).

Jeff reppin the Spurs out here

Back to Hobbiton, these little houses were too much. Jeff and I kept breaking from the group to get up close (even though we were warned there was electric fences)!

Yes I was pushing Jeff here. I told him to move so we could get the front door! Did he listen though?! 😡

We were in heaven. Jeff said that if he were a character in Middle Earth, he’d be a hobbit. Relaxing, smoking Southfarthing leaf, walking everywhere with bare feet. He already has the hairy feet down, blech. 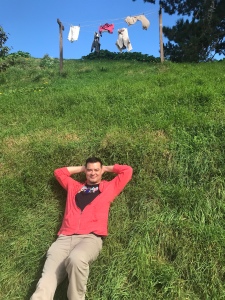 “On a hill above the ground there lay a dork hobbit.” Note above Jeff are Bilbo Baggins clothes hanging on the line outside his hole ❤️

We tried to soak up as much as we could, the houses often had benches, mailboxes, gardens all to hobbit scale! And the gardens were absolutely stunning!

Even had smoke coming out of the chimneys! 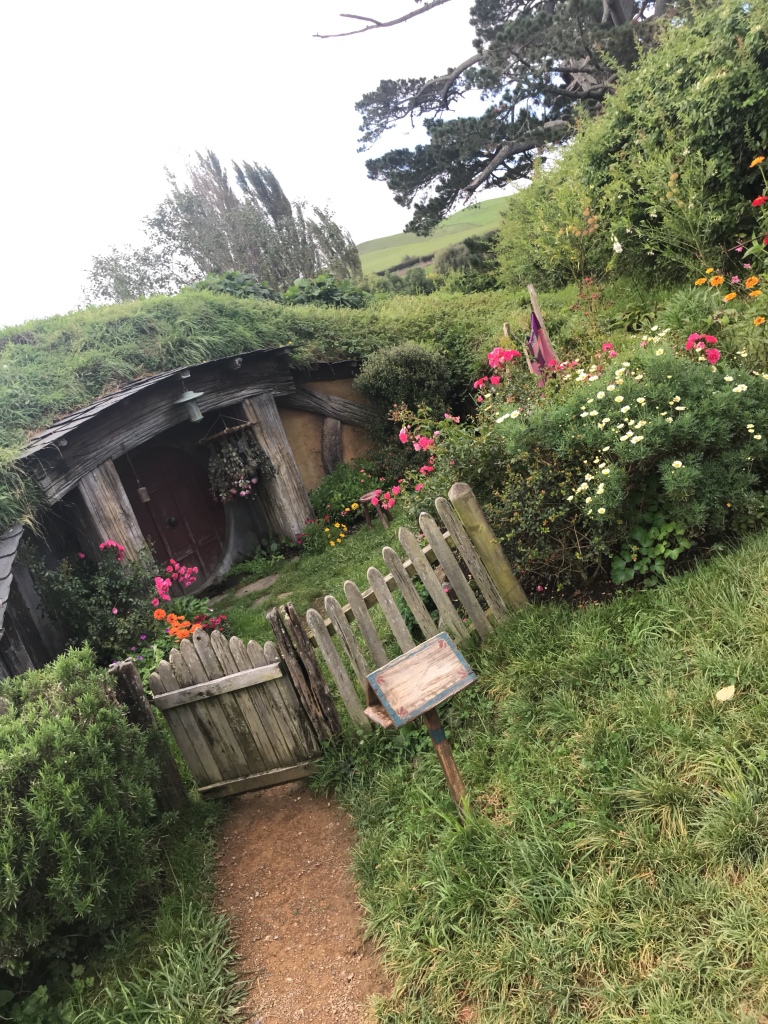 The pic above is Sam’s House. At the end he was married to Lovely Rosie Cotton with the flowers in her hair. This is where his kiddo runs up to him and hugs him at the end. Guide told us little known fact: Peter Jackson (the movie director ) wanted the scene to be authentic, so he had the actors use their own kiddos. The little boy is actually Sean Astin’s daughter, and the baby is Sarah McCloud’s.

Jeff first read The Hobbit when he was in 4th grade, long , loooooong ago. Wait, I’m older than he is, so not that long ago.

Finally, we made it to the long awaited spot: Bag End!

If you watched the movie, you’ll remember Bilbo’s one hundred and eleventieth birthday party. Here’s the party by the tree. 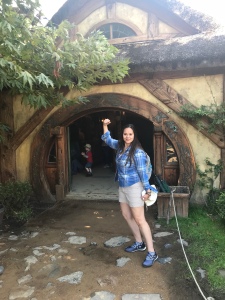 Welcome to the gun show at the Green Dragon!💪🏼 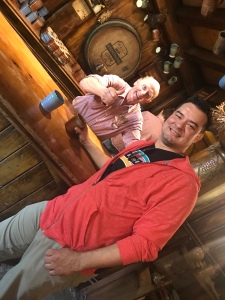 LOTR fans, check out the name on the barrel.

Ok guys, check this out…we are staying in a hobbit hole at Woodlyn Park in Waitomo

And before I forget, the owner of this place was beyond amazing/weird/friendly.

She had her pet possum Titzy. Titzy tried to take Jeff’s finger off. I loved Titzy.

And let’s not forget the resident pig, Joseph.

Side note: Joseph scared the crap out of me, he was snorting through the hedge above our hobbit hole, and I thought it was a wild boar ready to maul me. It was just Joseph. Damn Joseph.

Jeff and I ate at Tomo, the restaurant was a gem! Billed as an authentic Kiwi Restaurant, we shoveled this down our throats! 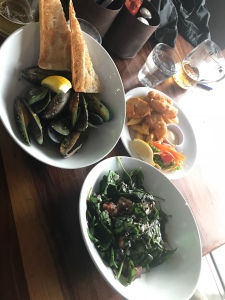 We also checked out the forest next to our hobbit hole. Lookout Point was amazing!

That’s it for our first full day in Middle Earth. Our expected journey surpassed our wildest imagination. Tomorrow we check out the Glow Worm caves and then retrace Bilbo’s steps as he took off for his Unexpected Adventure.