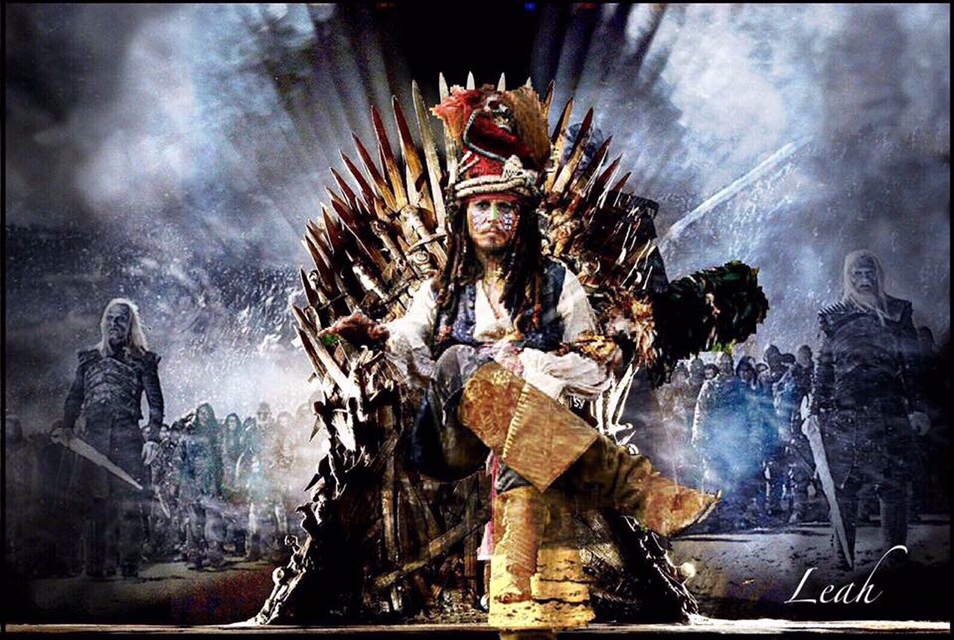 All Hail Chief Woody of the Huia (pronounced hoo-e-ya) tribe!!

Obviously that’s not me in the above picture, but that is how I felt during my time at the Tamaki Maori village we visited. 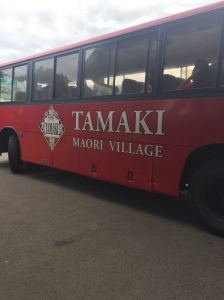 The bus picked us up (like the royalty I am) at the front door of the Ibis hotel where Steph and I managed to find a room (see Steph) without booking it weeks ago. Haha

The bus picks up few other folks and then makes a quick pit stop at home base to gather the rest of the group. Our bus says “Huia” along the side which makes us the Huia Tribe. The driver also informs us that the traditional greeting in New Zealand is Kia Ora, which means hello, greetings, good health, farewell, and goodbye. Kinda like aloha in Hawaiian or dude in Californian. 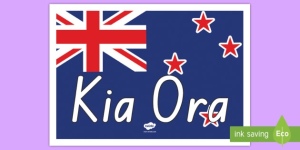 My inauguration as Chief happened fairly unceremoniously. No conquering of villainous hordes or 2-day hero’s parade. No. Our bus driver simply asked for a volunteer. Now, I’ve been called a lot of things, but shy was never one of them. So I raised my hand, and out of everyone else on the bus, the driver chose me. I feel like a major deciding factor to our drivers great decision to choose me was the fact that I was the only one who raised my hand. A win by default is still a win. So I become Chief Woody of the Huia tribe. 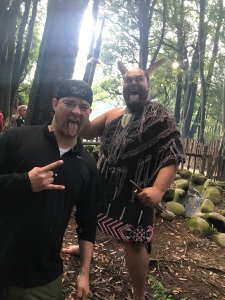 When we arrive at the village our driver goes over a few rules. Take all the photos and videos we like but no talking, smiling, or laughing while the opening ceremonies are happening. As Chief I am supposed to stand in front of my tribe with my hands visible, no smiling, and never breaking eye contact. If and when I am presented with a peace offering (in my case a fern that represents the land) I am to pick up the offering and back away. You are not to turn your back to them. The main Chief makes a quick speech welcoming everyone and then we do what is referred to as a “Hangi”. You place your left hand on the shoulder of the Chief and shake with your right. Then you lean forward and tap noses twice. This signifies the sharing of the breath of life and shows trust. Tapping 3 times means you intend to wed that person I was warned. After that the maidens come to gather the Chiefs (there was 3 other buses there) and lead them into the village. It was all very savage and loud and pretty cool to see and participate in. Here’s a few videos shot by Steph Spielberg , haha.

Inside the village we were taught a few quick lessons on Maori history, life, and culture. I won’t spoil it for you, but it is interesting to hear about where they came from, the significance of the facial tattoos and the origin of the Haka. Speaking of fearsome war dances, here’s my first attempt.

Not bad huh? Just kidding. This is how it’s supposed to look.

We were brought into a small auditorium for a few fantastic performances.

A love song was the highlight of the night. Aside from me becoming Chief, obviously.

We were then escorted to the dining hall to feed my tribes ravenous appetite. The food was cooked in traditional Maori style under the ground with volcanic rocks from the nearby volcano to cook the meat and veggies. 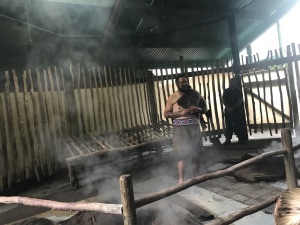 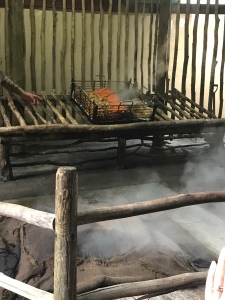 It was phenomenal. Potatoes, sweet potatoes, beets, radishes, lamb, roast beef, and few things I couldn’t pronounce. We were treated to dinner and a show.

All in all it was an amazing experience. Definitely worth the time. The culture was fascinating, the songs were quite moving and the food was delicious. Here’s my final Haka with my most fearsome warriors. 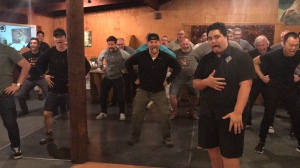 Steph and I trying to sneak a shot of the Tamaki Chief. His cousin caught us. 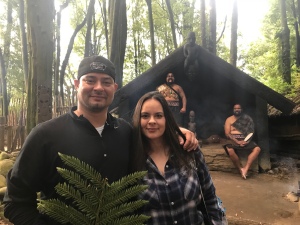 And as we are leaving Stephanie tries her best to make sure any bad luck that’s laying around will find us. 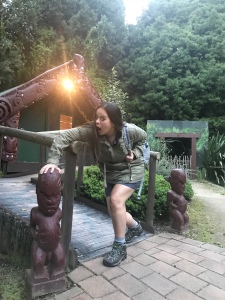 So that wraps up this chapter. Thanks for checking us out. Can’t wait to share the next adventure! TTFN 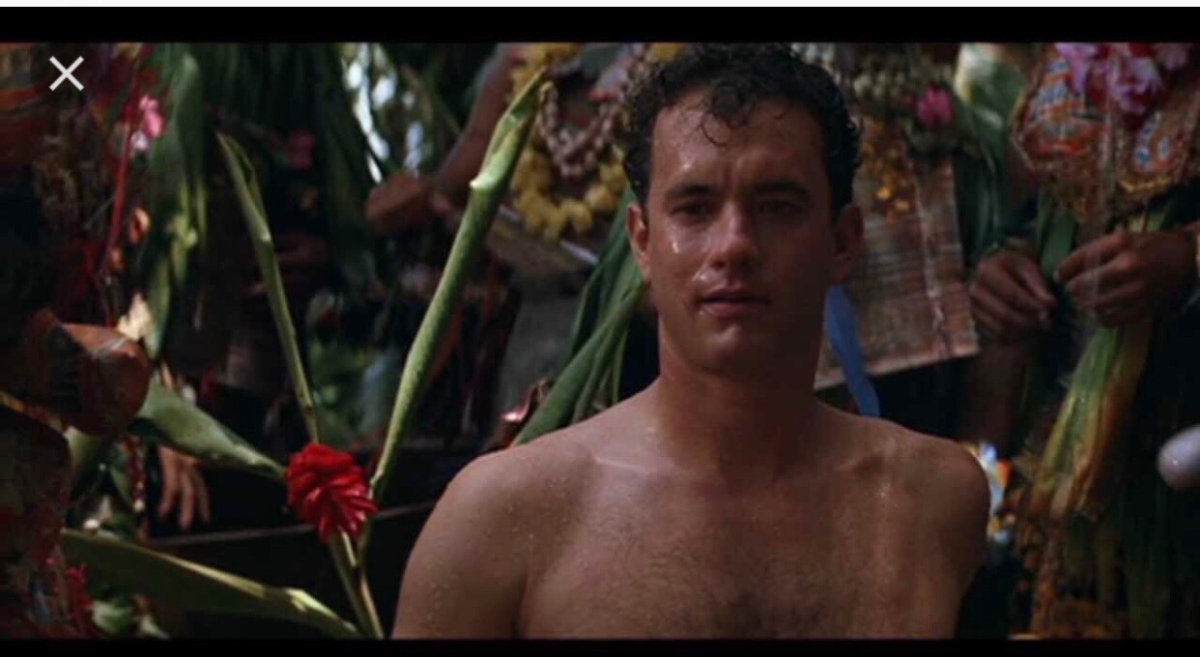 Once upon a time there was a guy named Jeff…

That’s actually Tom Hanks not Jeff, but hilariously enough there was a lady in NZ who kept saying Jeff looks like him. Hmmm, insult or compliment?? Lol

So on Day 6 of our adventure, we explore the volcanoes. We also visit a Maori village and Jeff gets named Chief. I’ll let him tell that story in Part 2 (it’s a highlight of the trip for sure). But first, we get to see the majesty of two volcanoes!

Before I go any further, let me just say people warned me about the smell. They told me, if you go to a town on the east coast of NZ that has hot springs, it stinks like hell. Well, they underplayed that card!

We left the mountains behind and headed to Taupo. This one wasn’t smelly. It was actually stunning.

That’s a hill in the middle of the lake. The lake is in the crater of the volcano. Yes, that blue in the back of the pic is the lake. Actually can’t see the end of it, it’s that big. The whole area, including where I took this pic, is literally a volcano.😱

Once we got to the lake crater we go exploring 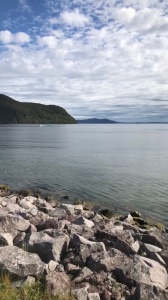 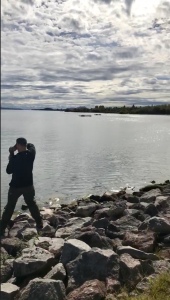 Jeff always in my damn shot 😡 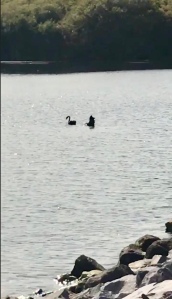 Those are black swans y’all!!😍

So the rocks that are surrounding the crater are volcanic rocks of course, and surprisingly many weigh close to nothing! 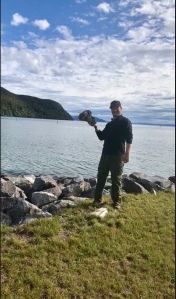 Oops, I was supposed to say they weighed a lot! In any case, welcome to the Gun Show ladies 😉

After collecting a few of these rocks (which, btw, made it through customs, whoohoo) we take off to our next destination: Rotorua!

We stayed at the Ibis hotel, which was nice. Considering the fact that pretty much all the hotels and motels were booked that weekend, it was a miracle they had an opening.

Before I go any further, let me just say, DO NOT listen to little brothers. Especially if they have a Gypsy soul. He convinced me before we left to plan only half of our trip, including lodging, so that we could play it by ear the rest of the time. DO NOT DO THAT PEOPLE! At the very least, secure lodging. The Gypsy would’ve been fine sleeping in the car, windows rolled up, sweating a stinky pond. Or windows down, freezing our arses off a la Dumb and Dumber

Ok, so the smart sister books the hotel and off we go! The drive was a little insane, curves and cliffs abound! And remember, driving on the “wrong” side! 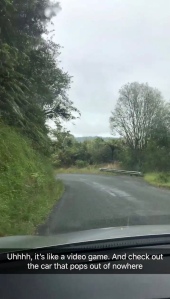 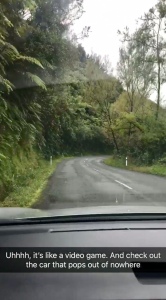 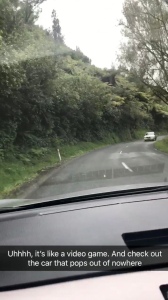 We gawk at the beauty that is Rotorua. Until we step out of the car. Y’all, the closest way to describe it is putrid, rotten eggs. Mind you, the scientific 👩🏻‍🔬part of me understood it was the sulphur…

Upside is that there were some shops in this town, it was pretty good size. Especially compared to the other places we stayed. In one town, there were no gas stations, closest one was 20 miles out! And they had no police station! That blew Jeff away. Closest one was “three towns or so away.” Wow.

As we checked the city on the volcano, we noticed something pretty cool. They had bean bags everywhere. I mean, people straight up lounging in bean bags at the corners of the streets! 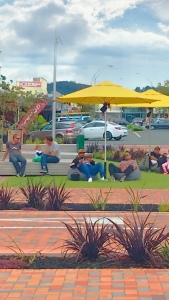 Guess who has to get in on the action 🙄 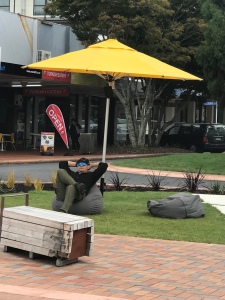 They love their Maori culture, beautiful sculptures on every corner. 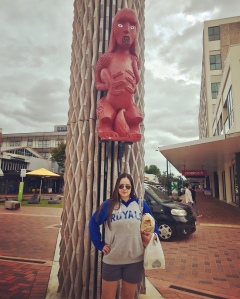 Before the night is through we soak in one of the acclaimed Polynesian geothermal hot springs. Omg!!!!! 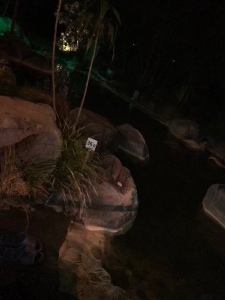 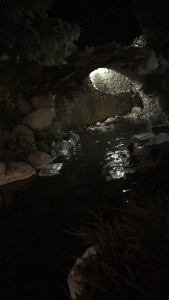 There was a spring called the Priest bath. 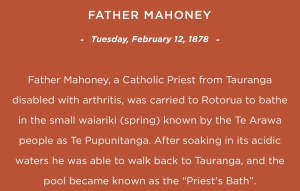 Jeff loved it and swore it worked! Lol 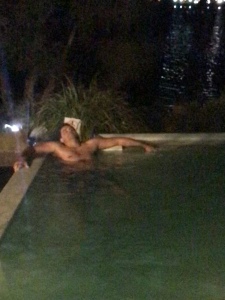 This really is Part I of our Rotorua day. Believe it or not the best is still to come of this day! Posting a teaser pic, let’s just say Hanks never did a Haka! 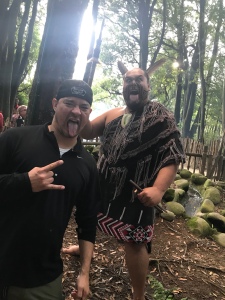 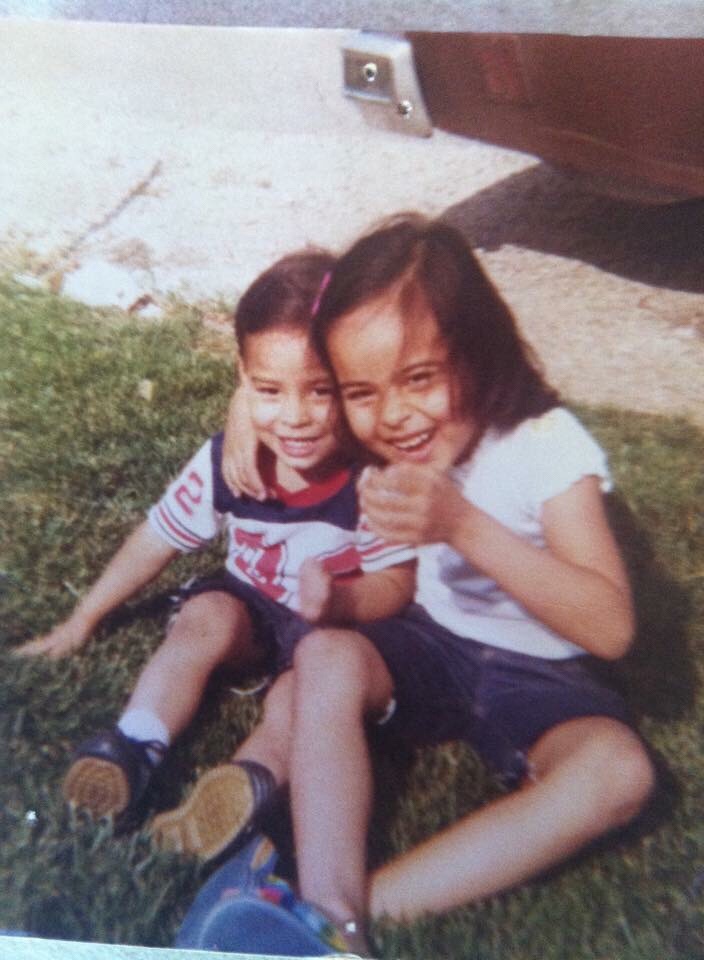 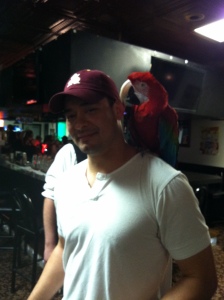 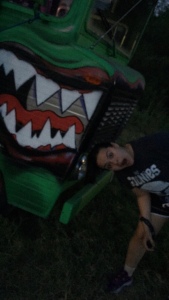 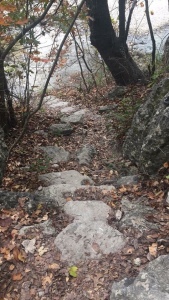 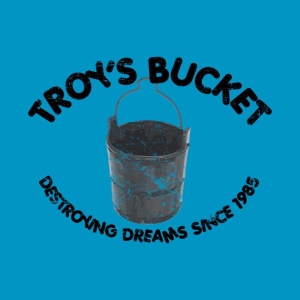